This semester, we decided to kick things off with a bit more of a bang. Instead of just having talks and Pizza, we decided to challenge our members new and old to quickly prototype and develop an algorithm for a robot to solve a maze.

Members were offered a base design of a robot, with which they were given 2 hours to elaborate and program to solve the maze. Challengers were encouraged to not hard-code their solution to the maze, and instead combine control theory with maze-solving algorithms in order to reach the finish line. They were provided with only two sensory inputs: an ultrasonic ‘distance’ sensor, and a light ‘color’ sensor. 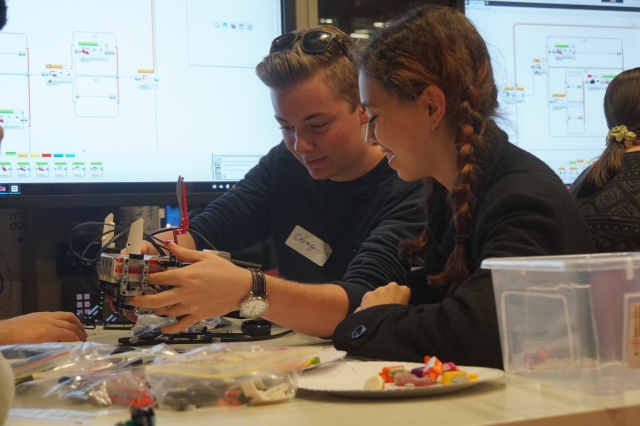 What proved to be one of the biggest challenges for most teams was getting used to the non-written form of programming that presented itself with EV3. EV3 are Lego robotics and programming kits that allow users to program their robot graphically. It is mainly designed for children, however as the computers running on the robots use Linux, they are capable of much, much more than expected. Due to the inexperience with the interface, even experienced programmers and engineers struggled with the challenge, making it an equal playing field for this with experience and those without.

Overall, roughly 30 members attended the event. Some great designs and many different algorithms for solving the maze were produced. In the end, one robot was able to successfully complete the maze, with a tiny bit of help from it’s human companions.

Afterwards, catering in the form of Pizza, soft-drink and water was provided after a brief tour through the campus robotics labs. All in all it was a fantastic event, and we will be likely hosting for the opening week next year as well.

COMING SOON: Computer vision beginner workshops, running weekly at 6-8 PM from Thursday the 18th of August to the 8th of September.